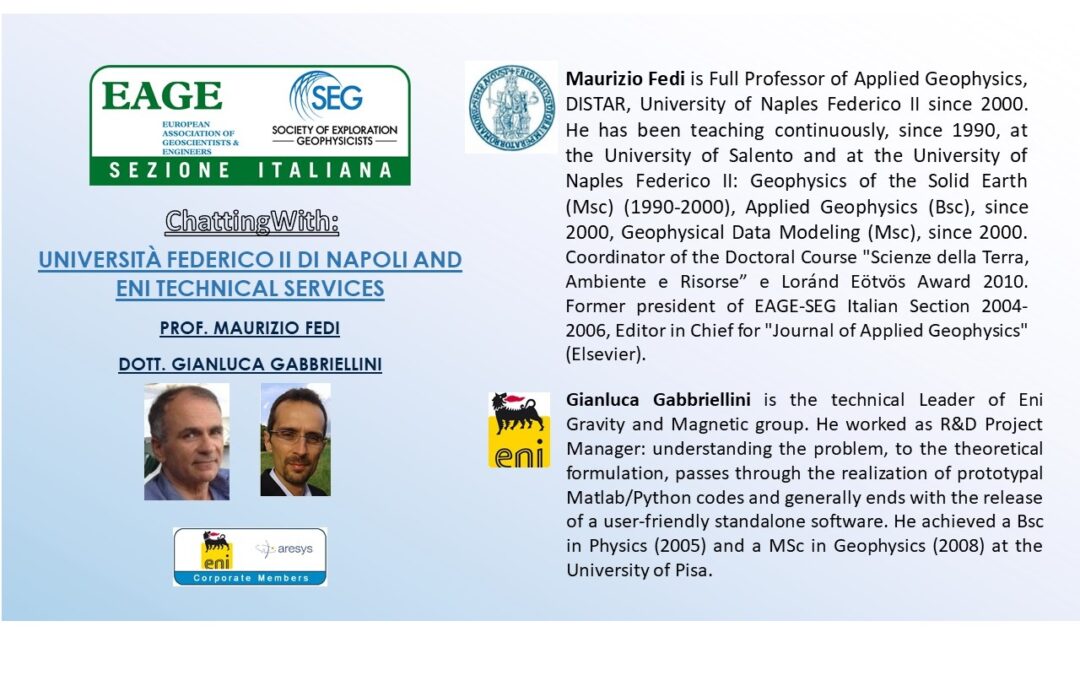 Potential fields are passive methods. They are based on the measurement of the Earth’s natural gravimetric and magnetic fields. In gravimetry, geophysicists measure the vertical component of the gravitational acceleration vector with great precision. In the case of magnetism, it is possible to measure the three components of the magnetic field vector or, more commonly, a single component called the total field. It refers to the direction of the main field that originates in the liquid outer core of the Earth. In geophysical exploration, these methods are especially suitable for highlighting variations in geological structures horizontally. For example, they can occur along a fault plane that brings different lithologies into a contact. In fact, in these techniques, it is important to assess the horizontal contrast of density or magnetization between different rocky bodies (depth domain). Consistently with this feature, gravimetry and magnetism are used to solve a number of geological problems (i.e. the definition of basement geometry in sedimentary basins; the exploration of subsurface for the mining industry). Moreover, potential fields are also useful for engineering (i.e. the research of cavities or ferrous materials: UXO; buried drums). These methods of investigation are among the most ancient: the modeling and interpretation are quite sophisticated. They include direct, inverse and ‘enhancement’ methods which consist in the calculation of derived quantities starting from the acquired data, where some structures of the field are more evident.

What are the main industrial applications of potential fields?

They are non-invasive methods. They find wide application in industry due to their relatively low cost. They allow to investigate very large areas, contributing to the understanding of the geology significantly.For Oil & Gas applications, their ideal location is in the initial stages of the exploration cycle in which they allow a large-scale screening to assess the potentialities of the area. In addition, they give valid support also in the subsequent phases, mainly for:

-Improve interpretation: understand the crustal nature in depth, identify structural trends, define the depth of the crystalline base and then establish the sedimentary thickness, identify volcanic intrusions, guide the interpretation of the bottom salt;

These methods are also useful for industrially for mineral exploration.

How has the teaching of this discipline changed during the last 50 years?

The innovation in teaching are linked to the increase in use of numerical programming. Nowadays, students are used to utilize many software as Matlab and Python extensively. There was the entry of many new, sensitive and automated tools (i.e. the gravimetric tide correction is now done automatically by gravimetric instrumentation). Furthermore, methods such as Fourier analysis or the Inversion theory are now an important part of the training of a master’s student. While the basic aspects of the methods do not change much over the years, new technologies and methodologies involve new updates, such as magnetometric measurements from drones or the joint interpretation of different types of data (i.e. grav. and mag.) through simultaneous joint inversion algorithms.

What is the maximum depth of investigation of the potential fields?

These methods have not specific depth limits. Indeed, they are useful for all survey scales: from archeology (depth of a few meters), exploration of natural resources (km) to geodesy up to the core structure (hundreds / thousands of km). Other methods such as Seismic, EM, FDEM, GPR have limits in this sense.

So, how do you investigate at a certain depth?

What is the resolution of this method, even comparing it to other geophysical exploration techniques?

By comparing two surveys, one seismic and one (i.e.) gravimetric, which have the same sampling rate, the spatial resolution of the two methods horizontally is comparable. In depth, however, the gravimetric data has a lower resolution. However, spatial resolution is improved with the use of gradients which, acting as spatial filters, emphasize small wavelength effects and reduce interference with the fields of nearby sources.

We often speak of interpretative ambiguity for fields of potential: what does it mean?

Unfortunately, the interpretation of all geophysical data (and not only of the potential fields) is not unique: multiple models can explain the same data. Fortunately, the extra info resulting from the use of multiple methods (see joint inversion) and geological constraints reduce ambiguity greatly. The ambiguity of the potential fields is known, because it comes out of the simple use of Gauss’ theorem. Anyway, all geophysical methods suffer from this limit: geoelectrics, Ground Penetrating Radar and Seismic of Reflection. I see a certain misalignment between the various methodologies on understanding ambiguity: some geophysicists often use data inversion by default, not understanding how the algorithm itself introduces heavy assumptions, which affect the final model (resistivity, density or others).

What are the new trends for the development of Potential Fields?

In the last decade we have been seeing the development of new methodologies such as Joint inversion, multiscale analysis and Machine Learning. Surely, they will revolutionize geophysics. The joint inversion, I mean the simultaneous one, is an old-fashioned dream that has been struggling a bit to establish itself as a routine method. Anyway some approaches, such as the one based on structural similarity, seem successful today, especially if the similarity constraint is imposed on the models and not to the complete system of equations. Multiscale analysis is perfect for potential fields because the field at different scales is physically based. In fact, the field at higher and higher altitudes is not a simple low-pass filter (as unfortunately someone still consider reductively) but allows to analyze in an integrated way (many depths from the ground) the properties of the sources in the subsoil. Many methods, even the inverse ones, traditionally are based on a mono-scale analysis. This concept should be completely redefined in this sense. Machine Learning methods now occupy the innovation scene. The real challenge is to demonstrate their usefulness comparing them to classical numerical methods: in applied geophysics what matters is our ability to reconstruct the properties of the subsoil regardless the used methodology. This approach is certainly advantageous. We will certainly see interesting developments in the coming years, as already evident from the first studies also in gravimetry and magnetometry.

What are the new trends in industrial applications?