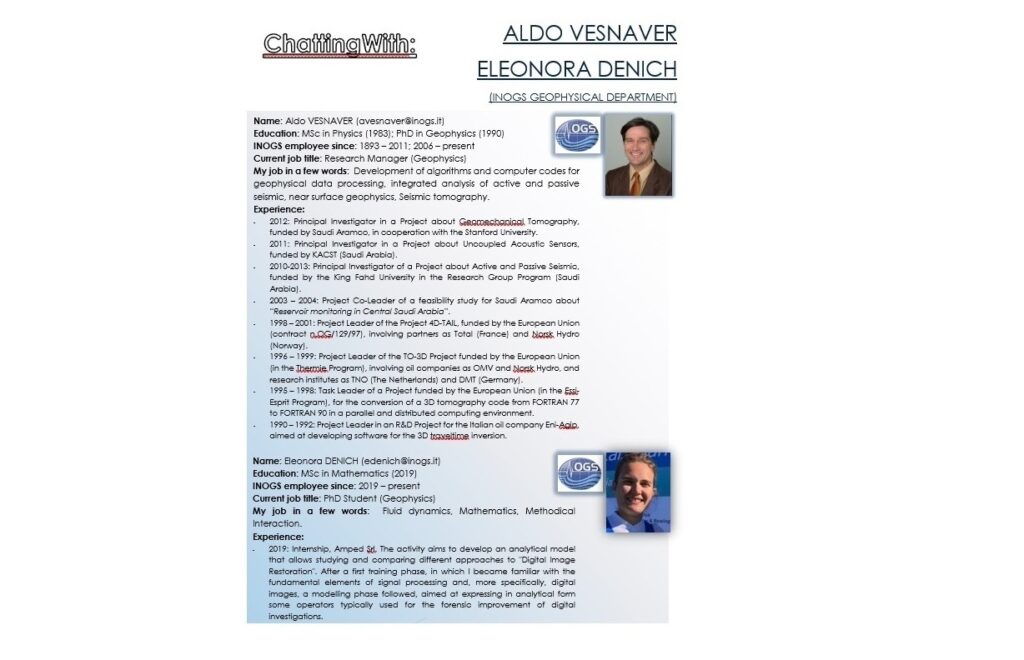 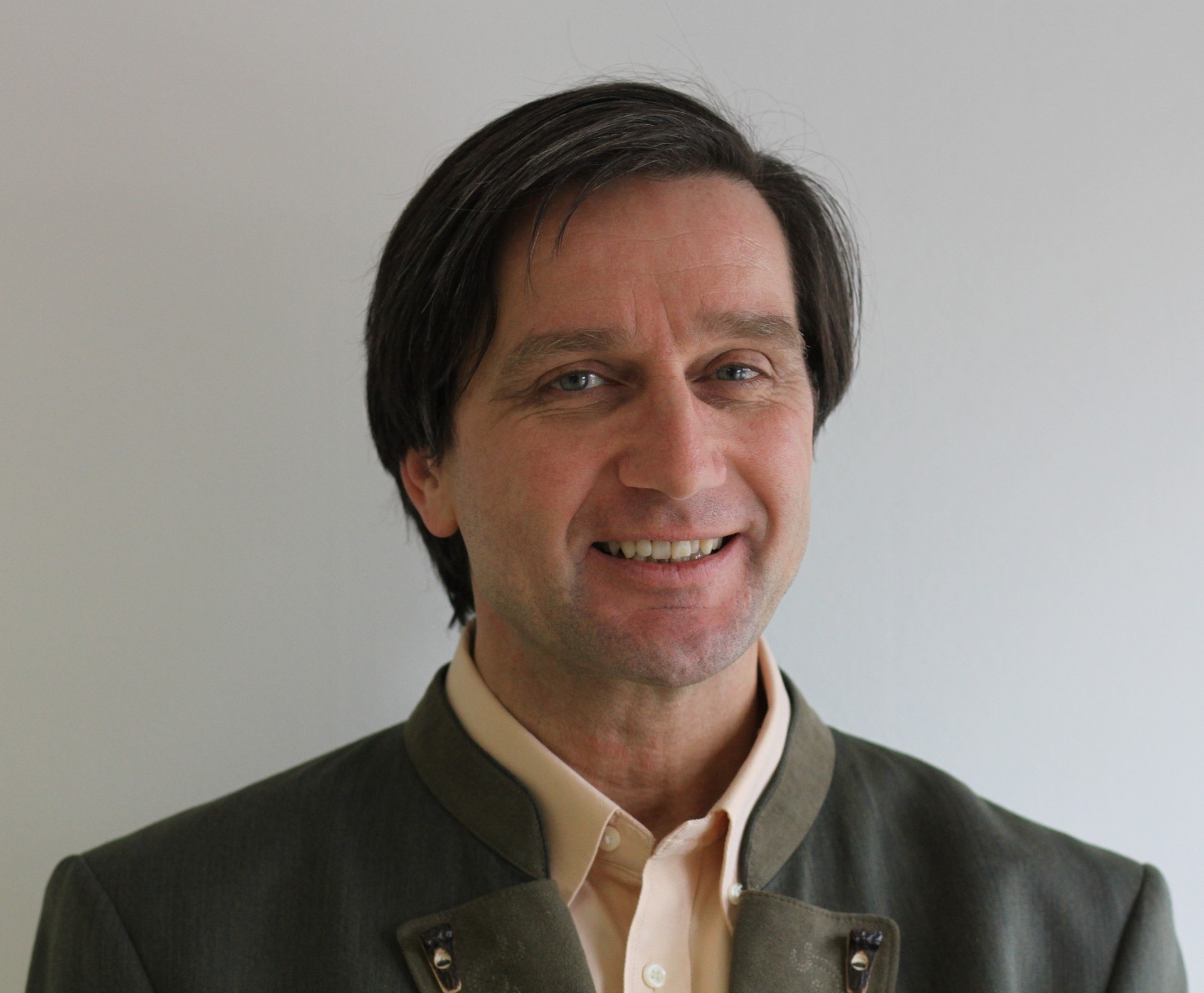 My job in a few words:  Development of algorithms and computer codes for geophysical data processing, integrated analysis of active and passive seismic, near surface geophysics, Seismic tomography.

2019: Internship, Amped Srl. The activity aims to develop an analytical model that allows studying and comparing different approaches to “Digital Image Restoration”. After a first training phase, in which I became familiar with the fundamental elements of        signal processing and, more specifically, digital images, a modelling phase followed, aimed at expressing in analytical form some operators typically used for the forensic improvement of digital investigations.

What are the main applications of Seismic Inversion in your research centre?

A.V. – In our team, two research trends have been living together for 10/20 years:

Considering these two branches of geophysics, which we have been working for about a year and a half to build our own approach to full waveform inversion. We do not want to replicate what already exists but look for new ways to reduce computational cost.

In particular, we have been thinking since the beginning to develop a parallel code. We have proposed some projects to keep multi-year funding of the ERC (European research council) and other public or private investors.

In your opinion, what are the future goals of Seismic inversion?

E.D. – In my opinion, researchers have recently been developing parallel algorithms of FWI, using tools such as High-Performance-Computing to implement Machine Learning techniques to analyze Big data (i.e. genetic algorithms).

A.V. – in the future, we will not have to limit ourselves to estimating only the P speeds but we will have to work more on the elastic front and extend the analysis also to the inelastic field. We could also get good results on the anisotropy front, but for the moment, I remain a bit skeptical. With a view to reducing calculation times, as Eleonora said, I believe that artificial intelligence is a very promising new frontier.

As an old physicist, I love this technique very much. I hope that the use of artificial intelligence is a way to improve the physical / analytical knowledge of the problem, constituting a more robust approach to represent the nature that surrounds us.

You both mentioned parallel computing, artificial intelligence, machine learning; what has been the impact of these technologies on today’s geophysics?

E.D. – nowadays the massive use of artificial intelligence has almost become a fashion. As Aldo said, techniques such as Neural Networks should not be used immediately. First, it is necessary to try to simplify the problem from an analytical point of view, defining sensible optimization functions. Already from the beginning, you can do a lot without immediately resorting to super calculators.

A.V. – I absolutely agree. I would like to add a historical note … I remember that in the 90s, expert systems were very fashionable, it seemed that these would be the future of Geophysics. In reality, after 10 years of talking about it, the revolution has not been seen, now there has been 20 years in which no one has spoken about it anymore.

Now another trend is re-emerging in which, although it has substance, the “smoke” around it should be eliminated. I would like to add that many critical issues, already mentioned by Eleonora, such as super calculus, have actually always been a key point of geophysics. Therefore, they are not completely innovative.

The amount of data collected is booming. It was always known that this would happen. I am referring in particular to single source acquisition techniques – single receiver, to very dense spatial sampling… micro-seismicity and time lapse have enormous datasets. They are a whole series of technologies that are not new but that have matured over the last 20-30 years. More than news, today I would speak of continuous evolution.

What are the fields of application of your research activity and who are your main customers?

E.D. – the goal of the FWI is to have a high-resolution mapping of the subsoil. These algorithms point towards the discovery of energy resources of various types, from hydrocarbons to geothermal. This technique can also be used for the identification of freshwater basins, mineral resources or even to obtain a mapping of the seismic risk. Our main customers are large energy and engineering companies.

A.V. – due to the recent economic crisis, aggravated by the Covid-19 pandemic, public and private companies have cut research investments over the last 10-15 years. The OGS develops many projects for external companies, although they have decreased recently. Minor cuts have been made so far in the public sector. Orders are moving, but not by our choice, from private to public.

In your opinion, what are future opportunities of the seismic inversion within the context of energy transition?

E.D. – I do not know how long we can go on looking for oil. The research activity will begin to shift towards alternative energy sources such as the search for freshwater basins. In addition, great emphasis will be given to all applications for engineering, the mapping of seismic risk, which I believe are fundamental in terms of prevention.

A.V. – there is a lot of oil and it will end perhaps in 200 years’ time. Environmental concerns are the oil & gas industry’s killer. Certainly, the production of hydrocarbons will decline. Anyway, I am very optimistic about the use of geophysics and of seismic inversion in particular, both for the applications mentioned by Eleonora such as hydrology, (which the OGS has done in the last 20/25 years also with important results), both for low temperature geothermal.

Lately, China has threatened the USA with blocking its exports, which immediately led mild advice to D. Trump, because if today the production of rare earths, which are abundant in China, were to stop, the world would stop. These metals could be the new oil.

Obviously, the production and exploration techniques are completely different but they still require geophysics. I believe that an integrated multi-parametric inversion, not only of VP, VS, Q parameters, etc … but also of electrical parameters for example, can be a new frontier.

The worldwide shortage of battery materials, accompanied by the transition from fossils to sustainable electricity, could be a strong “trigger” to give a new impetus to another type of geophysics that has always existed but has always been a bit the poor relative of oil exploration.

Aldo, if you had to give advice to a student who would like to work in the world of geophysics of seismic inversion, what would you tell him?

A.V. – I would tell him that he made an excellent choice for at least three reasons. Let us start with the worst-case scenario: the boy cannot find a job – the boy would have a professionalism in the field of super calculation that can be spent instantly.

Intermediate hypothesis: there are some jobs, perhaps even very well-paid ones, especially abroad, so if one wants to start a family, it is an excellent investment.

Best hypothesis: Very few people are following this path, so I believe that the chances of finding employment in Italy are much higher than in other specializations. Therefore, in my opinion it is an excellent choice, whatever the outcome and personal life choices one has.