SALTGIANT ETN: AN INTERNATIONAL AND INTEGRATED STUDY OF A SALT GIANT 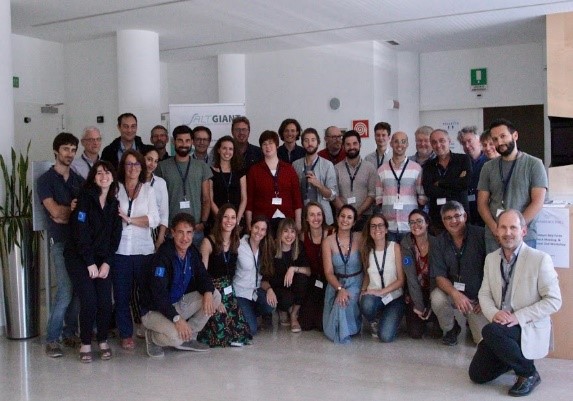 When we talk about controversial topics in geosciences, the Mediterranean Salt Giant (MSG) and its origin is one which comes immediately to mind. Since the discovery of Messinian evaporites under the Mediterranean deep-sea floor in 1970, many scenarios on what happened have been proposed, and yet none of them seem to fit the data throughout the whole basin.

SALTGIANT European Training Network (ETN) is a cross-disciplinary international network dedicated to better understand the formation of the Late Miocene Mediterranean Salt Giant. This project brings together geologists, geophysicists, geochemists, microbiologists, economists, and historians, with 15 Early Stage Researchers (ESRs) at its core. The doctoral students work among numerous academic organizations and collaborate with several private companies, as well as public and non-governmental organizations.

The SALTGIANT ETN together during the second Annual; Workshop in Trieste, June 2019
The research objectives are organized into four research work packages to understand the formation of the MSG and its implications for deep microbial life, for drilling hazards, for geo-economics of the Mediterranean region and for the history of this discovery itself. 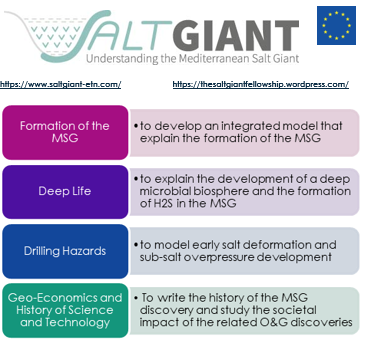 The four work packages of SALTGIANT ETN
SALTGIANT was initiated in 2018, for 4 years, under the scientific coordination of Giovanni Aloisi, senior researcher at the Institut de Physique du Globe de Paris (France). The project received a budget of 3.98 million euros granted by the EU Horizon 2020 research and innovation programme under the Marie Skłodowska-Curie Actions.

The Italian geoscience community is highly involved in this project: five of the ESRs studied for their master’s degree in Italy (Universities of Trieste, Torino, Federico II Napoli and Bologna). Among the 23 partners of the project six are Italian: GEPlan Consulting, the universities of Torino, Pavia, Trieste, ENI, Italkali and the SISSA Medialab. Lastly, two of the 13 beneficiary institutes are in Italy: The University of Palermo (UniPa) and The Istituto Nazionale di Oceanografia e di Geofisica Sperimentale (OGS).

Firstly, the UniPa is hosting ESR Athina Tzevahirtzian (MS in Oceanography at University of Bordeaux, MS in Geography at the University of La Rochelle), under the supervision of Prof. Antonio Caruso and Prof. Attilio Sulli.  She is performing geochemical, sedimentological and bio- cyclostratigraphical analyses on outcropping successions to provide new insights on the evolution of the Caltanissetta Basin, in Sicily. She will collaborate with the CNRS in the University of Montpellier (France) and the University of Hamburg (Germany). 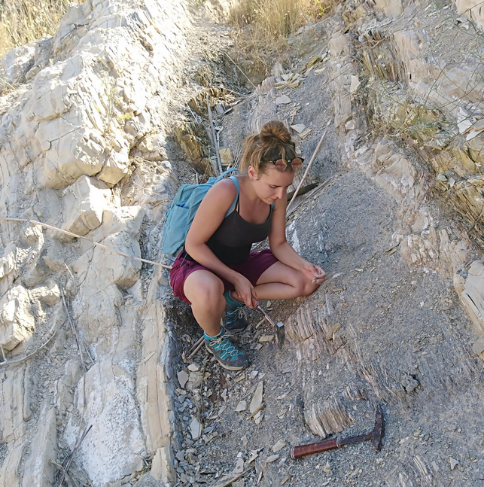 ESR Athina Tzevahirtzian collecting Messinian samples in Serra Pirciata, Sicily.
Secondly, the OGS is hosting ESR Simon Blondel (MS in geology at UniLaSalle engineering school, MS in Applied Geophysics at the IDEA League) together with the University of Trieste, under the supervision of Prof. Angelo Camerlenghi and Anna Del Ben.  He is re-processing vintage seismic data to identify and classify salt structures in the MSG and provide new seismic velocity fields for overpressure prediction. Future work will include secondment periods at ENI, the University of Montpellier (France) and the National Oceanography Center (UK).  He is currently working on a new imaging project of the Algero-Balearic Basin. Here, particular care was taken during Pre-processing to recover and preserve the low frequency content of the data, severely imprinted by swell noise and a space-varying bubble in this dataset. A De-signature operator has been designed based on the water-bottom reflection to consistently deconvolve the data and attenuate the bubble, thereby allowing an amplitude-preserving pre-processing. The initial velocity model is built through several iteration of semblance-based migration velocity analysis, and the depth velocity model is framed using a salt velocity flooding approach. First results suggest heterogenous salt with relatively low velocities, mud-structures, and the presence of a low-velocity pre-salt unit. Numerous amplitude anomalies hint at the presence of an active fluid migration system. 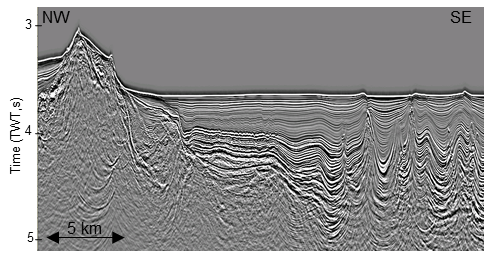 Part of one of the new Pre-Stack Kirchhoff time migrated seisimic line (processed by Simon Blondel with Reveal from Shearwater GeoServices)
This project stems from the larger-scale scientific network MEDSALT (a European Cooperation in Science and Technology Action). This network has acted as an incubator of scientific initiatives, among others the proposal of the return of scientific drilling operations to the Mediterranean, targeting the upper part of the MSG to resolve the demise of the crisis, the postulated Zanclean flooding, and the deep biosphere associated with the salts. In the end, after decades of scientific research and debate, it seems that the way forward to solve the MSG controversies will be through the acquisition of new well data with continuous coring. Let us hope the DREAM (Deep Sea Record of Mediterranean Messinian Events) will come true.

Any cookies that may not be particularly necessary for the website to function and is used specifically to collect user personal data via analytics, ads, other embedded contents are termed as non-necessary cookies. It is mandatory to procure user consent prior to running these cookies on your website.