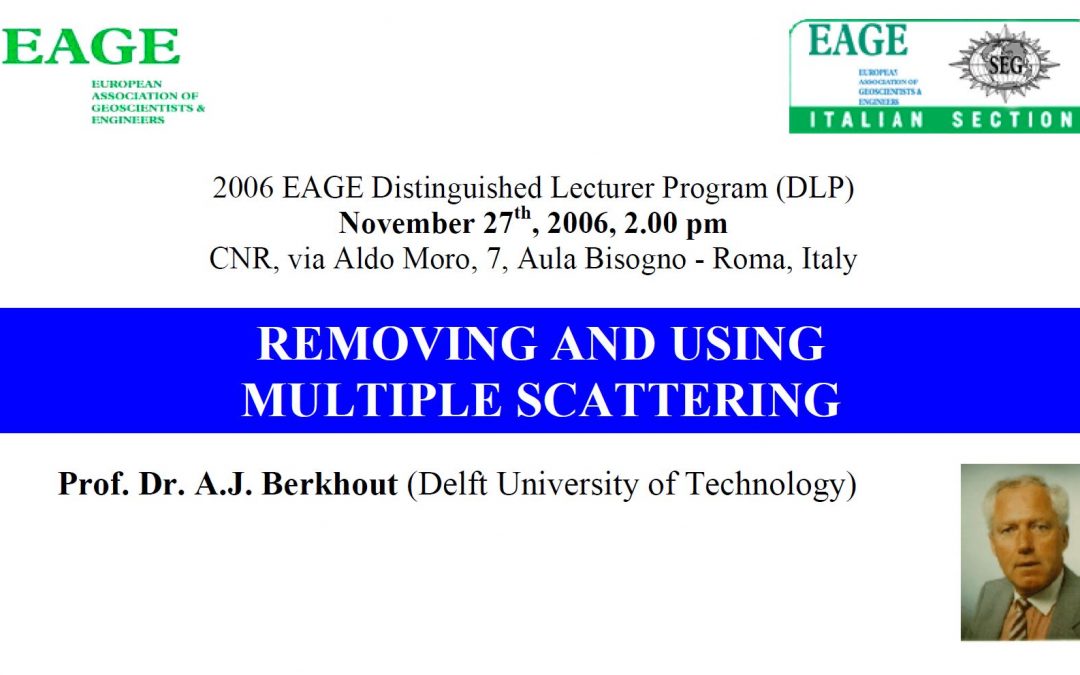 Current multiple-removal algorithms in seismic processing use either differential move-out or predictability. If the differential move-out between primaries and multiples is small, prediction is the only option available. In the last decade, multidimensional prediction-error filtering by weighted convolution, such as surface-related multiple elimination (SRME), have proved to be very successful in practice.

In the near future, one may expect that the so-called weighted correlation concept may offer an attractive alternative in approaching the multiple problem. This concept creates an option to avoid the adaptive subtraction process as applied in prediction-error algorithms. Moreover, it allows the transformation of multiples into primaries. So far, multiples have been considered as noise and, therefore, have been discarded after the removal process. In this lecture, we argue that multiple reflections contain a wealth of information that can be used in seismic processing to improve the resolution of reservoir images beyond current capability.

Guus Berkhout started his career with Shell in 1964, where he held several international positions in R&D and technology transfer. In 1976 he accepted a Chair at Delft University of Technology in the field of geophysical and acoustical imaging. During 1998 – 2001, he has been a member of the Board, being responsible for scientific research, knowledge management and intellectual property. In 2001 he also accepted a chair in the field of innovation management. He has developed a large number of new concepts and algorithms, which are now being commercially used in the upstream oil and gas industry. He has also written several hundred scientific papers, and a number of books in the fields of geophysics and innovation.

In the mid-eighties he founded the Science-Industry Consortium DELPHI, which is now financed by twenty five international companies.

Professor Berkhout is a member of the Royal Netherlands Academy of Arts and Sciences (KNAW) and the Netherlands Academy of Engineering (NFTW), an honorary member of the Society of Exploration Geophysicists (SEG) and recipient of the SEG’s Maurice Ewing Award. He also serves on a number of Governing Boards in the scientific and business communities.

Online registration http://www.eageseg-italy.it/. Deadline: November 12th, 2006. The registration is free for EAGE or SEG members 2006 and for students. All other participants have to become EAGE members (50€).