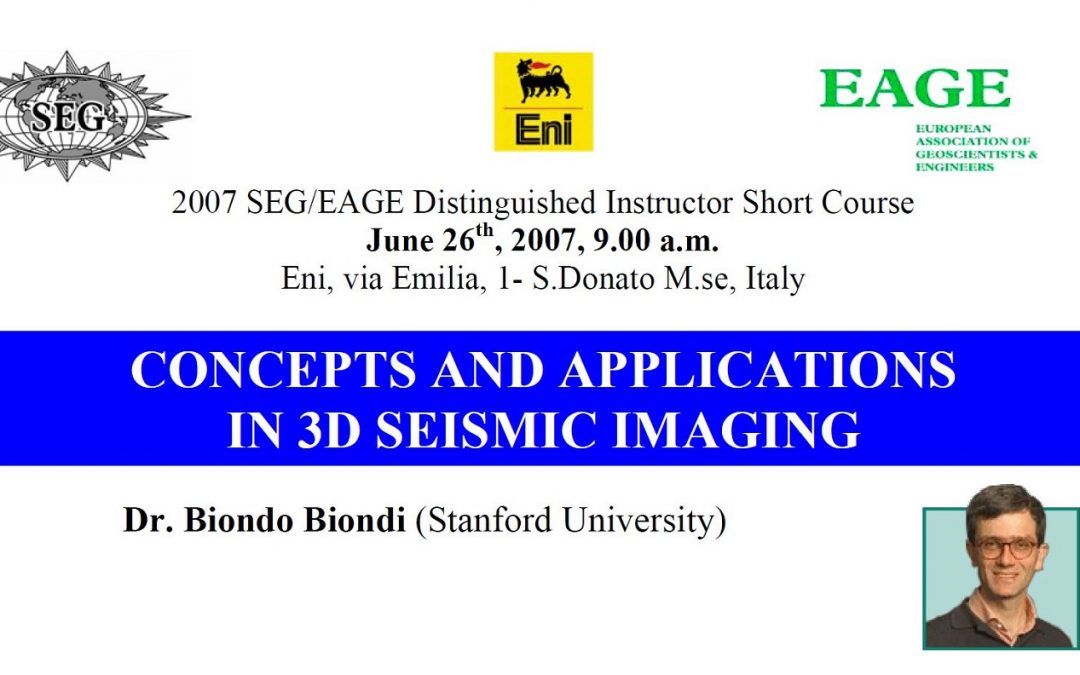 Seismic images are the basis of crucial exploration, development, and production decisions. Optimal use of these images requires a full understanding of the seismic imaging processes that create them, from data acquisition to the final migration. The primary objective of this course is to provide a broad and intuitive understanding of seismic imaging concepts and methods that enables geoscientists to make the appropriate decisions during acquisition, processing, imaging, and interpretation projects. Another objective is to expose the audience to current trends in imaging research and empower them to adopt new technologies quickly. The course is organized in four lectures devoted to the solutions to crucial problems encountered in practical application of 3D seismic data:

All geoscience professionals who use or process seismic data will benefit from attending this course. The course emphasizes conceptual and graphical understanding and minimizes the use of mathematical developments. Therefore the course does not require a theoretical background in seismology and can be taken by a broad section of working geoscientists, including seismic interpreters, processors, and imagers as well as petroleum geologists and reservoir engineers.

Biondo Biondi is Associate Professor of Geophysics at Stanford University. Biondo graduated from Politecnico di Milano in 1984 and received an M.S. (1988) and a Ph.D. (1990) in geophysics from Stanford. He is co-director of the Stanford Exploration Project (SEP) and leads its efforts in 3D seismic imaging. SEP is an academic consortium whose mission is to develop innovative seismic imaging methodologies and to educate the next generation of leaders in exploration seismology. SEP’s activities are supported by approximately 25 companies involved in oil & gas exploration and production. Biondi has made contributions on several aspects of seismic imaging, ranging from velocity estimation to parallel algorithms for seismic migration. Since the early 1990s he has been at the forefront of the development of wave-equation 3D prestack migration methods. In 2004 the Society of Exploration Geophysicists (SEG) honored Biondi with the Reginald Fessenden Award for his “development of azimuthal moveout (AMO), … AMO has contributed to many other developments in the areas of migration, multiple attenuation, and regularization of seismic data.” Biondi has recently written a book, 3D Seismic Imaging, that will be the first book to introduce the theory of seismic imaging from the 3D perspective. The book will be published by SEG in the Investigations in Geophysics series by the end of 2006. Biondi is in close contact with the practical applications of seismic imaging by his involvement with 3DGeo Development that he co-founded in 1994. 3DGeo Development is a growing seismic services company that brings innovative technologies to the exploration industry such as wave-equation imaging and Internet-based seismic processing.