2008 SEG Spring Distinguished Lecture: The Role of Amplitude and Phase in Processing and Inversion 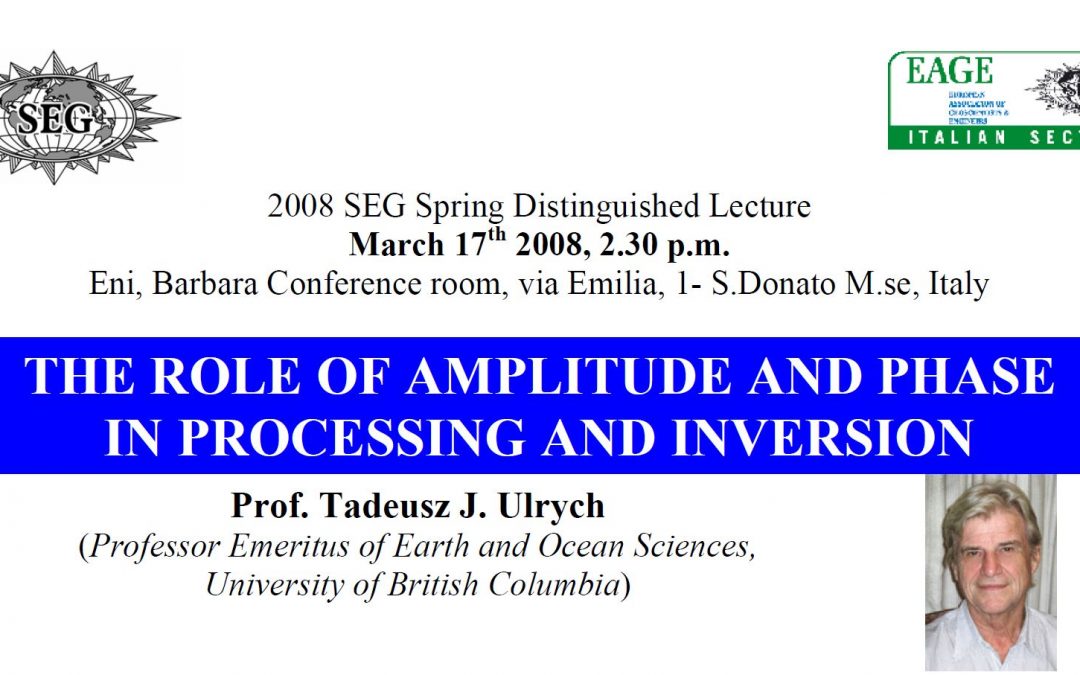 THE ROLE OF AMPLITUDE AND PHASE
IN PROCESSING AND INVERSION

ABSTRACT
The object of seismic exploration is encoded in the data that are acquired on or near the surface of the earth. The goal of decoding these data is, essentially, to find out where and what this object is. Although we record our information in space and time, we always, at some stage, follow the teachings of J.B.J. Fourier and transform our measurements into the frequency domain. In this domain, our data live in the phase and temporal and spatial frequency dimensions. The “where” is encoded in the phase, the “what” is encoded in both the phase and amplitude.
The aim of the processing of the data is to remove obscuring artifacts such as coherent and incoherent noise, statics, and the ubiquitously deleterious effect of the seismic source signature. The aim of inversion is to answer the question, “what?” Processing in our industry has achieved an enviable level of success. This success, I will argue, has been achieved, to a large extent, by concentrating on the role of the amplitude properties of the inherent distortions cause by undesired components. Phase has played a much lesser role and consequently, so has the retrieval of the vital information concerning the “where”. Inversion, successful as it has been, has also in my humble opinion, placed amplitude in a lofty position as compared to that of phase.
The purpose of this presentation is to convince you that treating amplitude and phase with the equal dignity that each deserves can lead to some interesting and important results. Specifically, I will deal with only-phase reconstruction, by which I mean the inversion of information by using only the phase component without any a priori assumption concerning the amplitude (championed by A. Oppenheim and colleagues in the early 1980’s). I will also reintroduce, after a 35 year absence from this field and because of exciting new developments, cepstral processing and its application to the deconvolution of thin beds. Finally, I will foray into the dangerous territory of attributes. Dangerous because there are so many and dangerous because I know so little. However, my colleagues (M. Sacchi, M. Graul, and T. Taner) and I have recently had some hopefully interesting thoughts and results which we would like to share.

BIOGRAPHY
Tadeusz J. Ulrych was born some time ago in Warsaw, Poland. His travels began early, 1939 to be exact, when Adolf had a brain blitzkrieg. Following sojourns in Rumania, Turkey, and Cyprus, he ended up in London, England, where he obtained a B.Sc. degree in Electrical Engineering (like all geophysicists?) at London University. A year working in ultrasonics convinced him to seek deeper pastures and he moved to Canada where, at the University of British Columbia, he received both his M.Sc. and Ph.D degrees (1961 and 1963) in the study of lead isotopes under Don R. Russell. His first academic position was as Assistant Professor at the University of Western Ontario. Following a thrilling PDF at Oxford and the Bernard Price Institute at the University of Witwatersrand, Ulrych joined the University of British Columbia where he has remained these many and happy years. He has been an Invited Professor at PPPG (now CPGG) at the Federal University of Bahia, the University of Kyoto and OPERA, University of Pau. He has consulted and given courses in various locations around the globe, and continues to do so in spite of mandatory retirement which earned him his present position of Professor Emeritus (office, graduate students, research projects, no salary but free parking). Tad’s interests are signal processing, information and inverse theory, and a plethora of other topics that change bimonthly. He has supervised a few students, published some papers and coauthored a book with M. Sacchi.